A bit of chance, a lot of hard-work, and a vision to extend science beyond the purview of academics led Priyanka Jamwal to be one of the driving forces against water pollution in the city of Bangalore

Priyanka Jamwal, who grew up in the foothills of the Himalayas, feels nature was intrinsic to her upbringing. Unlike many of her peers whose passion for the environment was stoked by its degradation, she grew up near clean streams that snaked their way across the great snow-clad mountains, emptying into rivers and creating reservoirs, and providing clean drinking water to people. 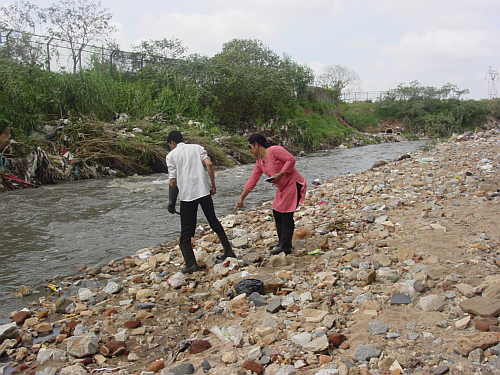 Hailing from the town of Sundernagar in Himachal Pradesh, India, Priyanka’s path was paved by hard work and supportive parents. Growing up in a joint family where women were schooled in the village’s primary schools while men went out of the village to study, Priyanka’s father insisted on equality in education and enrolled her in a convent school in Sundernagar. Being one of the handful of students who came from neighbouring small towns, she faced discrimination at the school, which only bolstered her resolve to study harder and get a college education. “One doesn’t understand what discrimination is until they are much older. I was in class eight when I realised I was being discriminated against because I did not belong in the same social bracket as the rest of my peers.”

When it came to pursuing further studies after class 12, she opted for engineering, a traditional male bastion. More than a calculated decision, however, engineering was a matter of chance: “I never knew what NITs and IITs were until I was faced with applying to colleges. The National Institute of Technology (NIT), Hamirpur, was a three-hour journey from home and enrolling there would ensure that I was constantly in touch with my immediate family.” Thus she pursued her BTech in Civil Engineering from the NIT.

While in BTech, she developed a great interest in structural engineering and would hone her interest in designing load-bearing structures such as bridges and buildings. She went on to pursue a master’s degree in environmental engineering, then an emerging discipline, from the Punjab Engineering College, Chandigarh. She landed a job with RITES Ltd, a semi-government organisation in Gurugram, where she was in charge of designing highways. However, unsafe living and working conditions prompted her to switch jobs, and as chance would have it, she bagged a PhD position in IIT Delhi’s civil engineering department. It was here that she first worked in the area of water management— her PhD topic explored pollution in the Yamuna River and the point and non-point sources of pollution in the city of Delhi. Since then, she has worked on urban sewer systems, effects of urbanisation on the quality of urban runoff, waste-water treatment, groundwater pollution, and adaptation of water systems to climate vulnerability.

Being a woman in science comes with its fair share of issues, “Science is a male dominated industry, where casual sexism and even sexual harassment are often brushed aside. Many institutes, which have been male bastions for years and are headed mostly by men who have steadily risen up ranks, tend to not take young women scientists seriously.”

Gender biases aside, Priyanka feels lacunae in science; scientific insights on issues that concern the public as well as the state often fall on deaf ears. However, more recently, her work has been instrumental in creating a debate around wastewater reuse and pollution in Bangalore. Her work on Bangalore’s wastewater revealed how industrial and domestic pollutants find their way into the city’s river, which irrigates verdant fields of vegetables, mulberry, and fodder for the burgeoning diary industry. Not only has her work been in the media limelight, but it has also led to several policy discussions to amend waste-water treatment in Bangalore. More recently she has started work on the effects of poor sanitation structures on groundwater and the distribution of emerging pharmaceutical and cosmetic-based contaminants in urban hydrological systems.

She says, “Science is most rewarding when it is integrated with a wider network of practitioners and policy makers to affect change on the ground. My recent work has greatly expanded my network and has helped build a rapport in the heavily bureaucratic departments of the state government.” She envisions many more women joining science in the future, for science has for long been a male dominated discipline and to this day there are few women scientists. “I advise women who wish to enter science to constantly keep pushing themselves and not get demotivated. Science can be a pretty strenuous discipline and one mustn’t give up their passion for it in the face of adversity. ”