(on behalf of the ATREE CFR in Central India team)

How do we as researchers help in the implementation of a progressive but complex piece of nature resource legislation? The  implementation of the Forest Rights Act of 2006, especially its community rights provisions, has raised this question for us repeatedly. Typically, research tends to be post-facto: showing what went wrong with Joint Forest Management, or throwing light on how implementation could have been better in the case of the FRA. Supporting ongoing implementation efforts presents a different challenge: interfacing our somewhat academic understanding with the particular ground realities of state administration and people’s priorities. Our new project on “Training, Capacity-Building and Decision Support for CFR Rights Recognition and Management in Bastar district”, where the Bastar district administration invited us to provide such support, has thrown us this challenge. But we are heartened to find that our specialised knowledge can indeed make a difference!

Under the landmark Forest Rights Act of 2006, the Community Forest Resource Rights provision enables the devolution of forest management rights into the hands of villagers. But the claiming of these rights by forest-dwelling communities has not been easy for a variety of reasons. Even when, as in Chhattisgarh state, the state government has been eager to facilitate this devolution, actual implementation is a challenge. Neither do the villagers nor the ground-level officials charged with facilitating the process have a good understanding of this provision, nor is there a simple way for them to ‘map’ the claim or identify the claimed area in a way that both the villagers and the administration understand. The fact that the Revenue department’s maps don’t show forest compartment boundaries and the Forest Department’s maps don’t show revenue village boundaries just adds to the confusion. In other words, the villagers and the officials are not on the same page! Moreover, the patwaris (village accountants who hold revenue records) seem to think that since the area being claimed is a forest, it only falls under the jurisdiction of the forest department, and stay away from this process. But letting the forest department run the process of communities claiming rights over forest is a fraught one for obvious reasons!

To address this gap and confusion, the CFR team at ATREE has developed a webGIS system (a mapping system accessible through a web browser) that superimposes four types of maps of Bastar district: a Google Earth/Bing satellite map, the village (revenue) boundary map, the forest compartment map, and cadastral maps of each village (showing the parcels inside the village). This webGIS is probably the first time in India that revenue boundaries, forest compartments, and cadastrals have been overlaid on a single basemap and made publicly and easily browsable.[1] This allows both the villagers as well as the administration to identify the forest area that lies in and around each village and develop their claim for it. It also serves as a way for patwaris and forest guards to understand each other’s maps.

The usefulness of the WebGIS system in understanding the landscape in conjunction with various different boundaries is illustrated in the sequence of images below of Jharumargaon and neighbouring villages. One is able to see the satellite view of a village overlaid with revenue boundaries (red lines), forest compartment boundaries (green lines) and the village cadastral map. Through this, one is able to see how much forest a village has within its revenue boundary, which khasra numbers are associated with this forest area, and whether all of these patches have forest compartment numbers. Note how a patch between Jharumargaon and Aasana village is not in any revenue village, but an RF outside village boundaries. Note also how the forest compartments stretch across village boundaries.

A map of the revenue boundary of Jharumargaon village (and neighbouring villages) in Bakawand block, overlaid on Google Earth satellite view 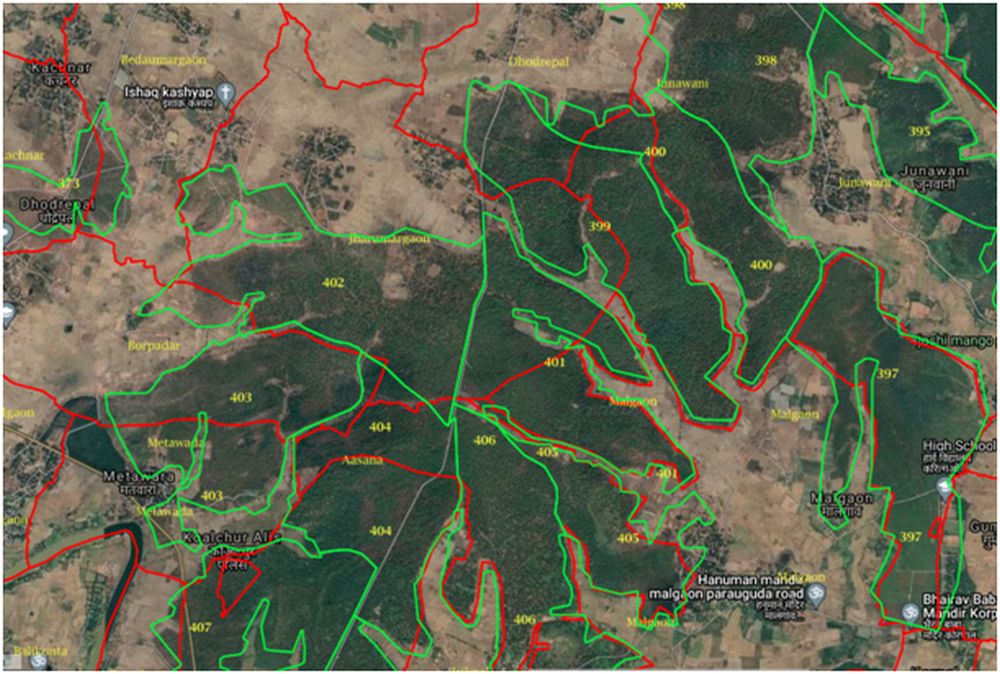 A map of  the revenue boundary of Jharumargaon village (and neighbouring villages), overlaid on Google Earth and forest compartment maps 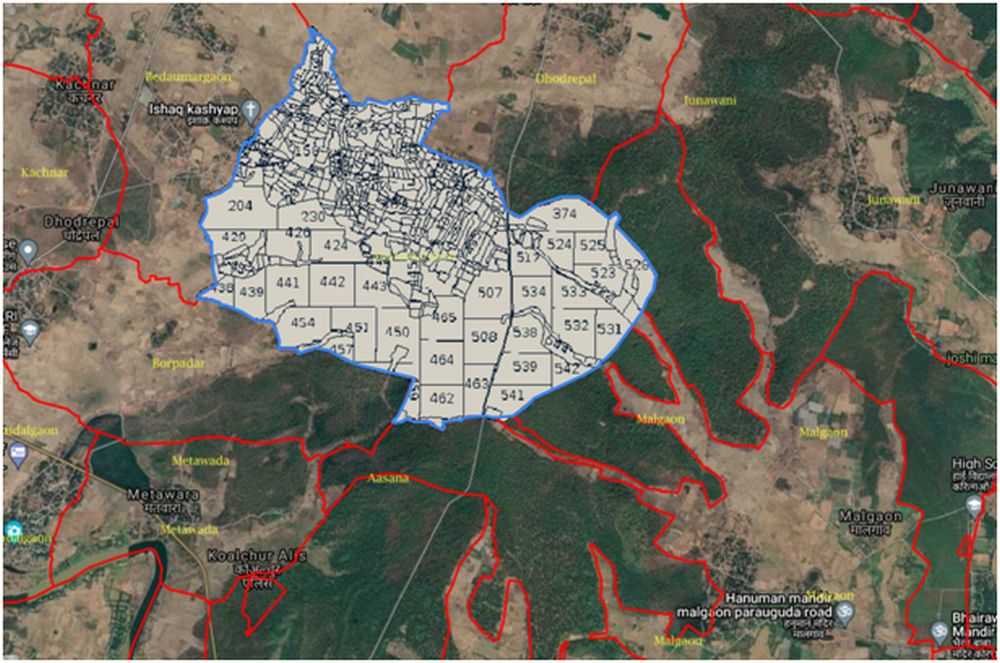 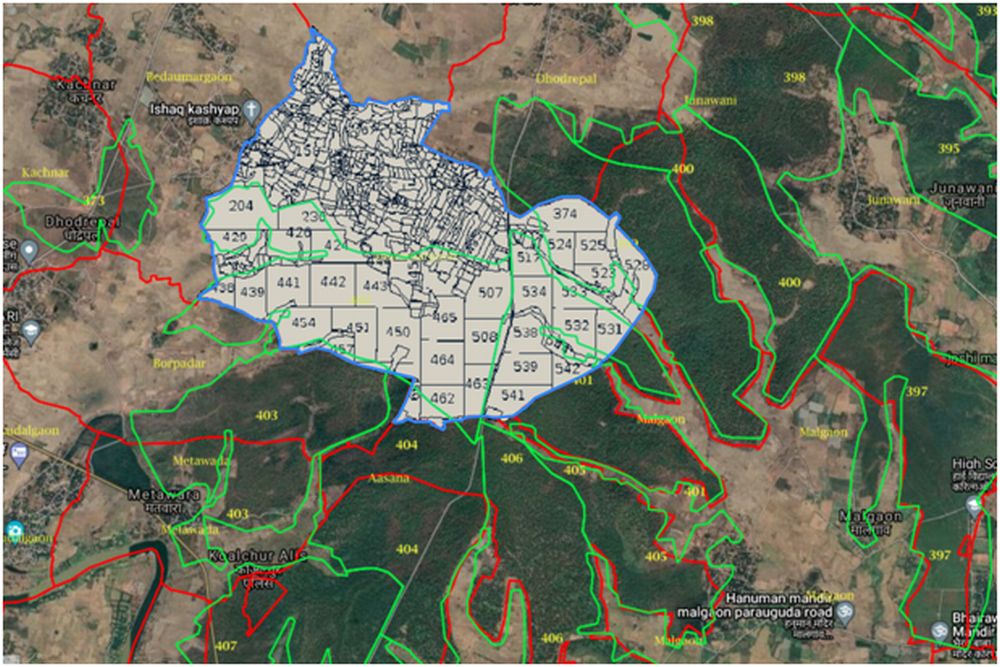 Forest compartments have been overlaid onto the cadastral map

While the CFRR recognition process in Bastar district had proceeded rapidly over the past two years, reaching 192 titles, we noticed errors in some of the titles given and argued for using this webGIS to rectify them and to avoid such errors in future claims, as Bastar district aims to recognize titles in an estimated 450+ ‘CFRR potential’ villages. Agreeing to our suggestion, the District Level Committee requested ATREE to conduct workshops at each of the 7 blocks in the district for members of Forest Rights Committees from the villages and the Patwaris and Panchayat Sachivs from that block. The workshops were held successively between 7th and 14th February, and were conducted by Sharachchandra Lele (Project leader), Anubhav Shori (District Coordinator), Ananya Rao and ATREE’s team of 18 FRA Coordinators (a team mainly composed of Adivasi youth, including women).

In the workshops, we focused on explaining the nature and importance of CFR rights, understanding the terrain, the various administrative boundaries and the titles already recognized through the webGIS, clarifying misunderstandings and outlining simpler but more accurate ways of preparing the claims. The workshops began with an explanation of the origins of the FRA, the nature of community rights over forests recognized under it, and the importance of recognizing management rights so as to enable a people-friendly and bottom-up forest governance system. After this, our Coordinators took turns in inviting the audience to name a village that has received a CFRR title and using the webGIS to show the village location, revenue boundary, forest compartments in and around it, and the cadastral map of the village, so that the audience itself could determine if the title had been correctly recognized or not. 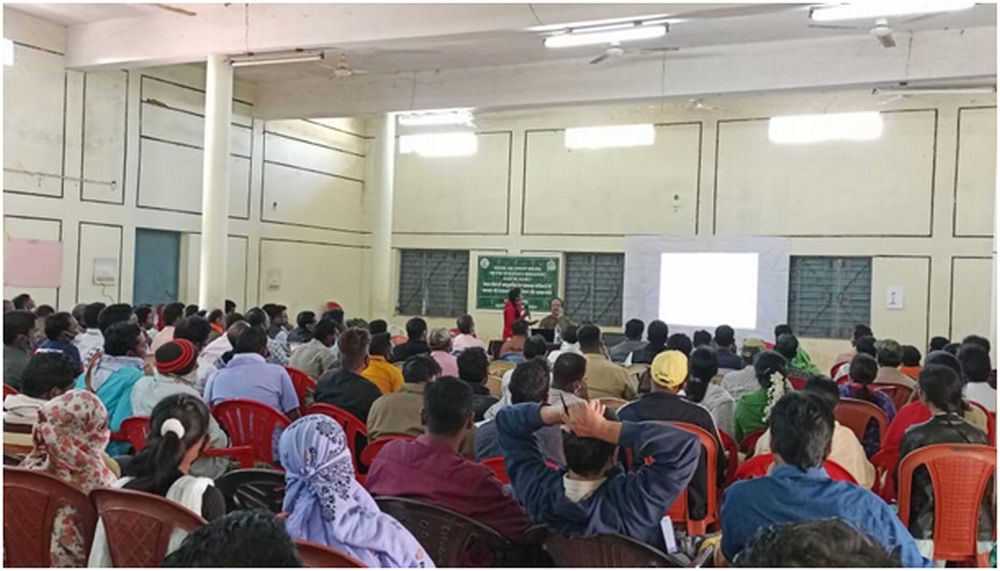 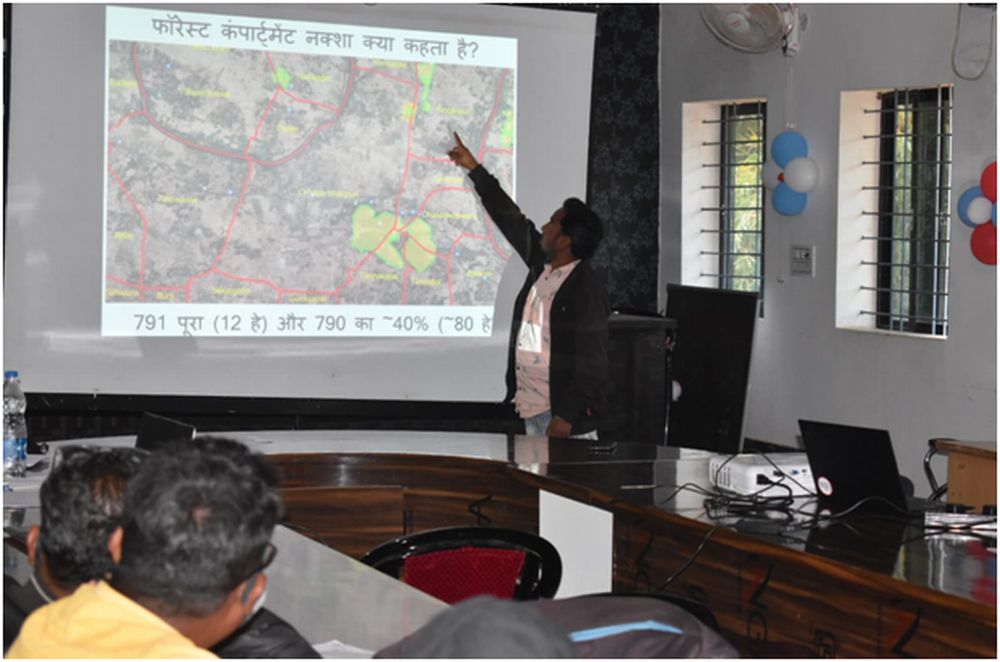 One of the most common misconceptions that was cleared in the process was the idea that land belongs either to the forest department or to the revenue department, but never to both. A quick glance at any village through the WebGIS system instantly demonstrated that this assumption is false - there are many forests that are located on revenue lands, which have both revenue ‘khasra’ (survey) numbers as well as forest compartment numbers. 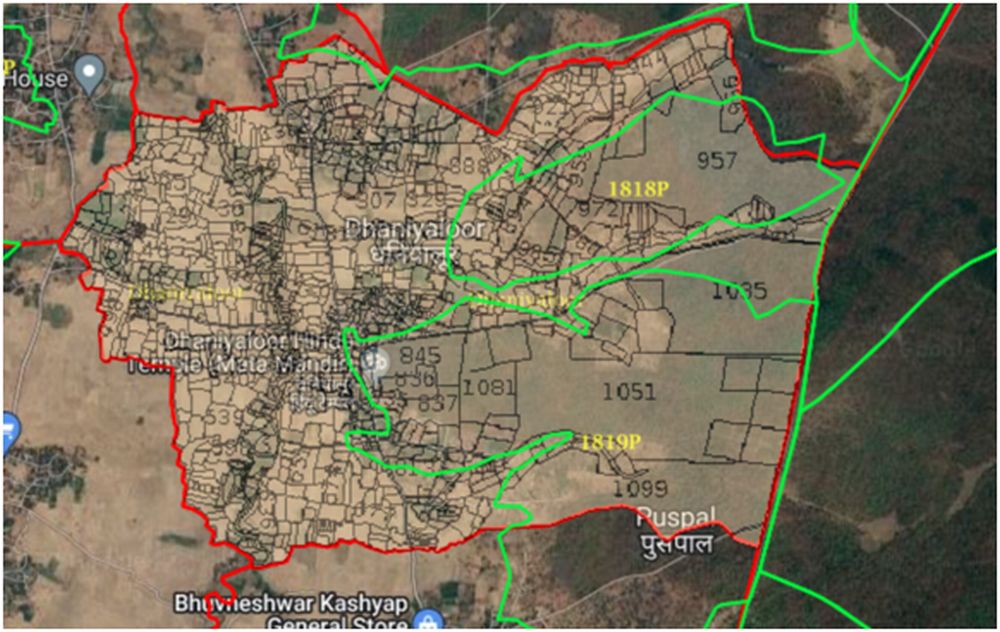 This map of Dhaniyaloor village in Jagdalpur block shows that the forest compartments 1818P and 1819P overlap with many revenue compartments which contain forest area, such as 957, 1035, 1051 and 1099

Another common misconception that was cleared was the idea that all forests have compartment numbers. This notion was disproved when people were able to observe clear patches of forest that were visible on Google Earth’s satellite map, but did not have any forest compartment overlaid on it. 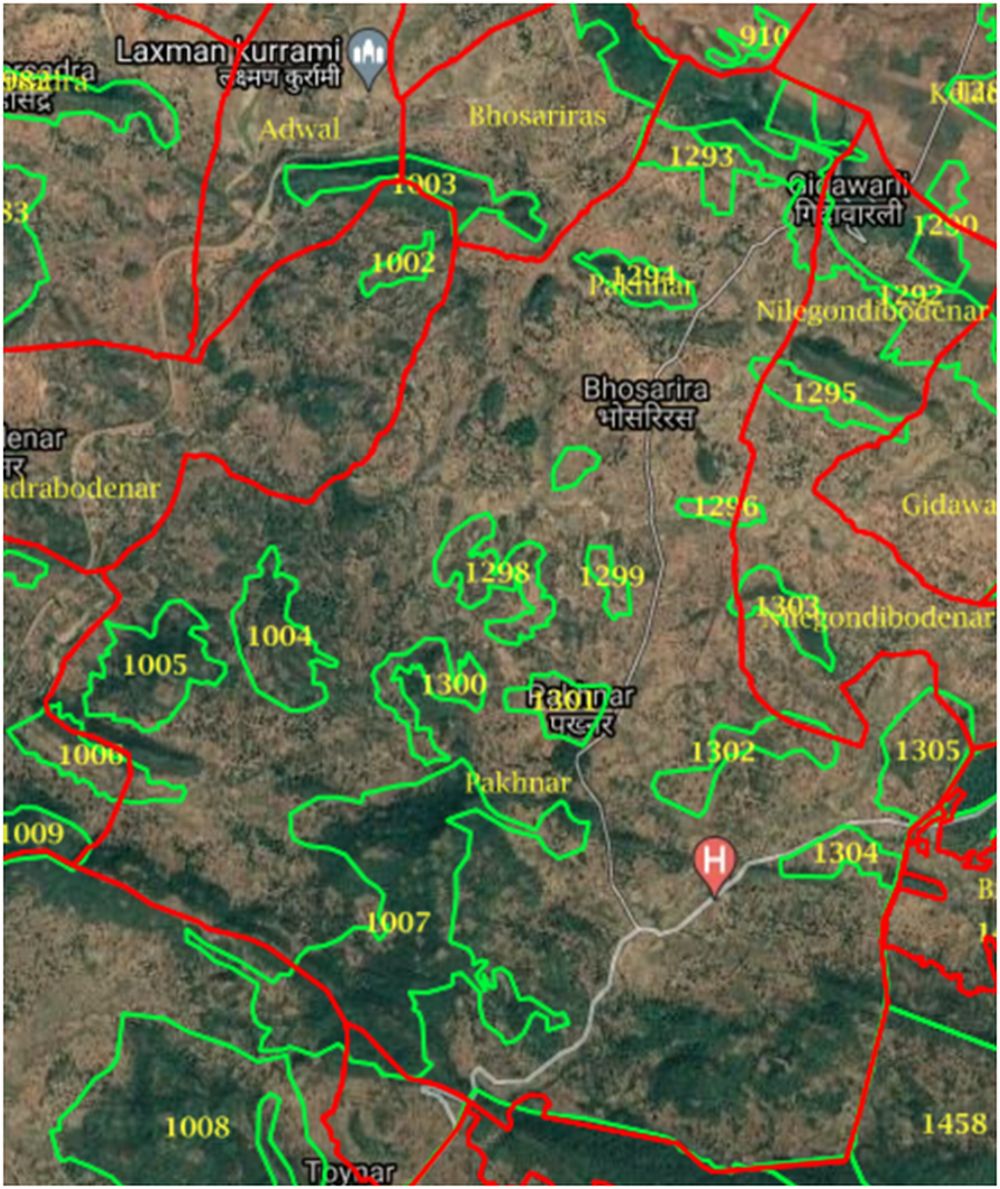 Having demonstrated the usefulness of the tool, we divided the participants into 3-5 breakout groups, each consisting of villagers and officials from their villages, and each anchored by an FRA Coordinator who had a laptop displaying the webGIS page. Participants could zoom into their particular village, see its cadastral map and the forest compartments in and around it, and compare them with the title, if already received. In the process, the importance of claiming CFR rights was reiterated and the common misunderstandings about these rights were clarified, queries from the officials were answered, and their roles in the claims process was also clarified. Our Coordinators conducted these breakout groups in the local Halbi, Dhurwi, and Gondi languages as required, as many of the participants were less comfortable with Hindi. 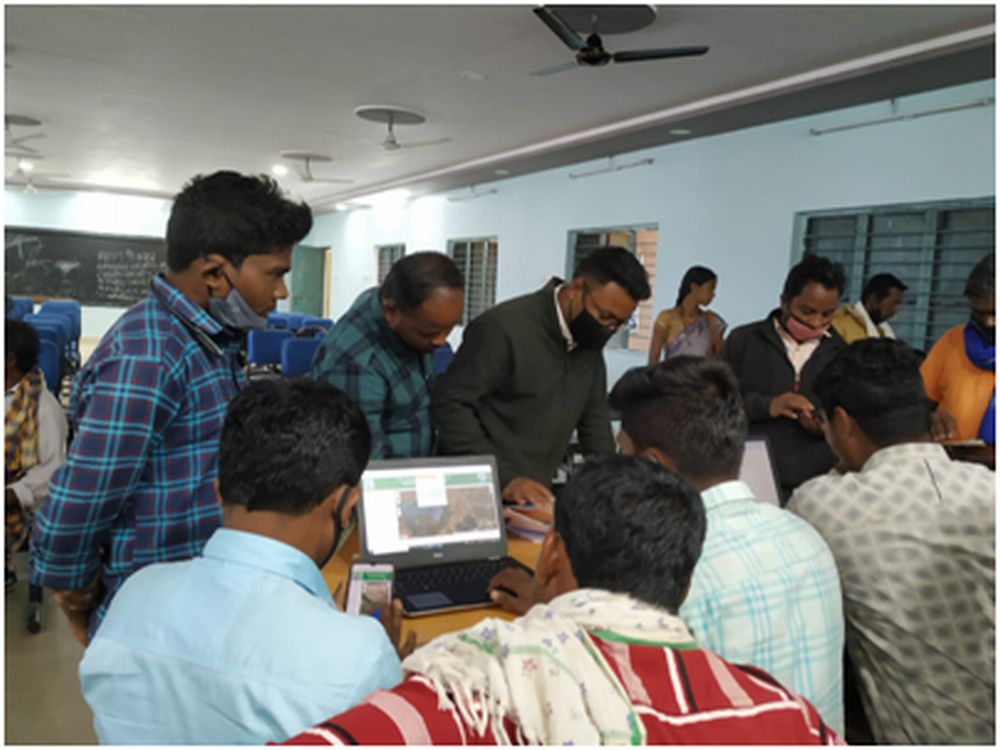 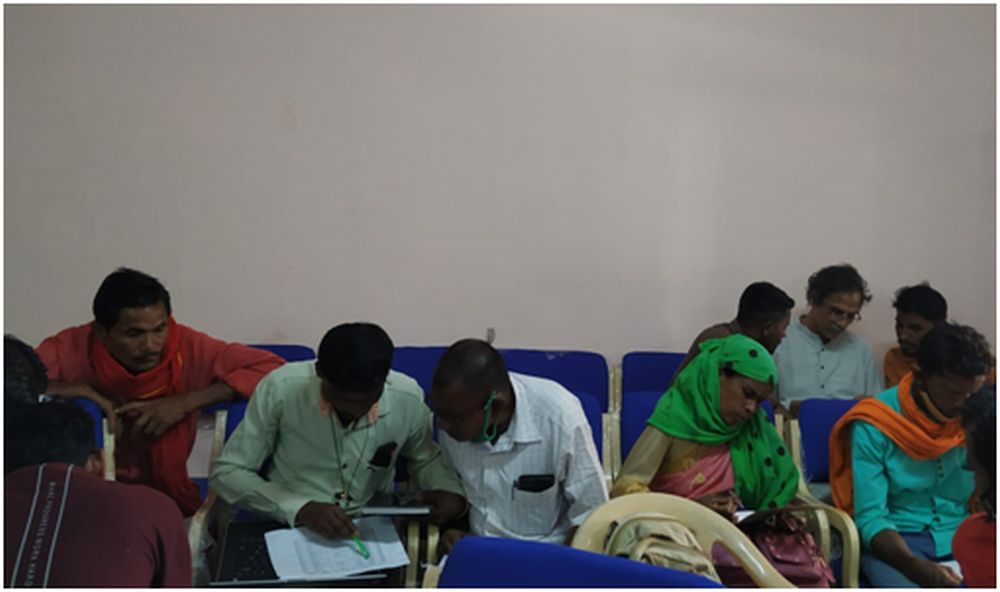 The participants responded enthusiastically to the training, with many even claiming that, had they been given this information and resources earlier, they would have carried out the correct claim-making process a long time ago. Participants were able to understand what CFRR entails, the procedure for preparing a robust claim, and how to use the Web-GIS system themselves to aid in this process. This allows every village to initiate the CFRR process themselves with a clear understanding of why it is important and what steps need to be carried out to achieve it.

The workshops were also a great learning experience for our team. We got a closer understanding of the socio-ecological realities of Bastar, the gaps in the understanding of the officials and the villagers regarding CFR rights, and the challenges involved in following the very detailed process laid down in the Chhattisgarh FRA manual.

Instead, as the images for Jharumargaon and Dhaniyaloor above show, if one overlays the revenue (cadastral) map, the parcels or khasras related to forest lands become immediately apparent. These patches have already been surveyed and their area is in the land record with the patwari, who can quickly list all parcels of ‘forest land’ (as per the definition in the FRA) and their area. This also highlights the importance of the patwari to the CFRR claim-making process, which is contrary to the common assumption that the patwari has nothing to do with it, because it is a ‘forest-related Act’. The claim-making process should thus begin with the patwari’s records of forest lands as it will avoid any error of omission within the village boundary and errors of (see images of Bheja village below). 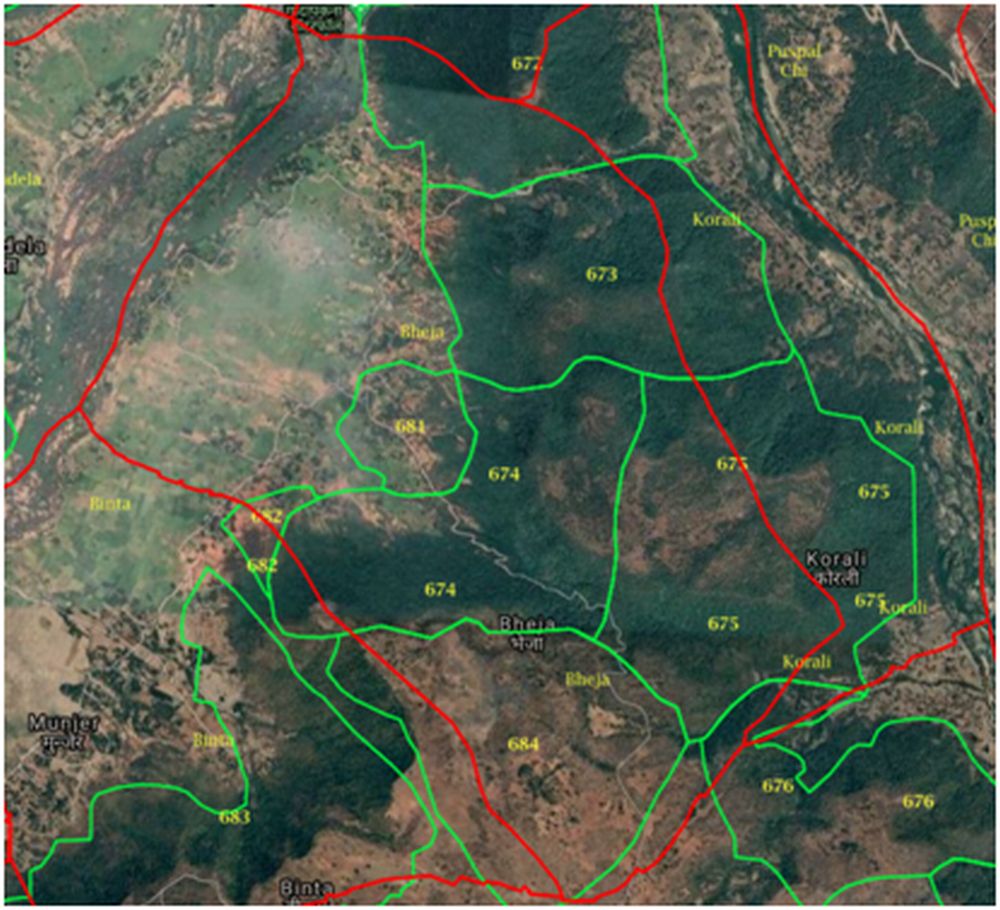 In Bheja village in Lohandiguda block, forest compartments 672, 673, 674, 675, 681 and 684 all fall within the village boundary. However, many of these compartments also overlap with neighbouring villages. Major portions of 672, 673 and 675 fall in Korali, and if the entire compartment is given to Bheja, it would unfairly be giving away portions of Korali’s forest. 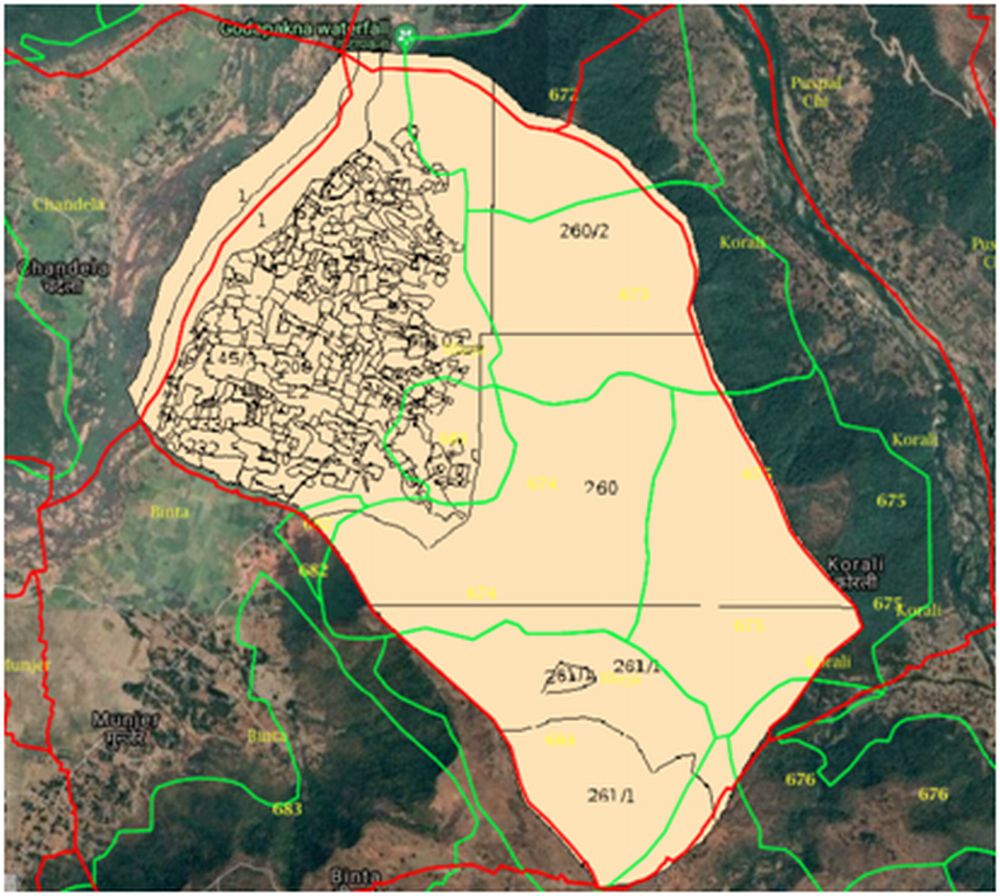 Instead, if Bheja claimed revenue khasra numbers 260, 260/1 and 260/2, it would give Bheja rights over all the forest within their own boundary, without encroaching on Korali.

We are helping the Bastar district administration build on these learnings to improve and streamline the CFRR claim-making process. The next few months promise to be very hectic but exciting, as we see the translation of our geospatial technology system and improved understanding of the socio-ecological terrain into better implementation.