Garcinia L. (Clusiaceae) fruits are a rich source of (−)-hydroxycitric acid, and this has gained
considerable attention as an anti-obesity agent and a popular weight loss food supplement. In this
study, we assessed adulteration of morphologically similar samples of Garcinia using DNA barcoding,
and used NMR to quantify the content of (−)-hydroxycitric acid and (−)-hydroxycitric acid lactone in
raw herbal drugs and Garcinia food supplements. DNA barcoding revealed that mostly G. gummi-gutta
(previously known as G. cambogia) and G. indica were traded in Indian herbal markets, and there was no
adulteration. The content of (−)-hydroxycitric acid and (−)-hydroxycitric acid lactone in the two species
varied from 1.7% to 16.3%, and 3.5% to 20.7% respectively. Analysis of ten Garcinia food supplements
revealed a large variation in the content of (−)-hydroxycitric acid, from 29 mg (4.6%) to 289 mg (50.6%)
content per capsule or tablet. Only one product contained quantifiable amounts of (−)-hydroxycitric
acid lactone. Furthermore the study demonstrates that DNA barcoding and NMR could be effectively
used as a regulatory tool to authenticate Garcinia fruit rinds and food supplements.
Globalization in the trade of herbal products and an expanding commodity market have resulted in widespread
consumption of medicinal plants as drugs, cosmetics and food supplements, both in developing and developed
countries1,2. Quality, safety and efficacy of herbal medicines are key requirements for public health and a major
concern for regulatory authorities3. In India, herbal raw materials for the herbal industry are predominately
harvested from wild populations4 .Unsustainable harvest of medicinal plants from the wild can lead to severe
ecological consequences, including reduced plant populations, habitat destruction, loss of genetic diversity, and
local extinction of species5. India is the second largest exporter of medicinal plants and exports mainly in the
form of dried plant products4. Several reports suggest that only 10% of medicinal plants traded in India are being
cultivated2,4. Growing commercial demands for raw drug products increases the incentive for adulteration and
substitution in the medicinal plants trade, and such adulteration can threaten consumer health, damage consumer
confidence, and generally lower the trade value of such products1. 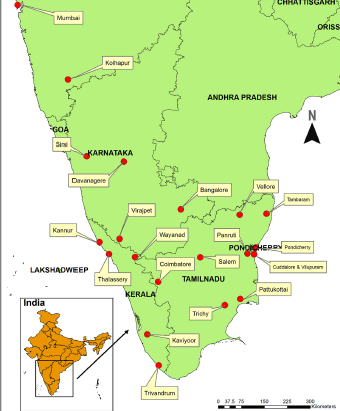 the predominant Garcinia species occurring in the Western Ghats, and these are locally traded as Kodampuli and
Kokum, respectively (Fig. 1). These species are traded throughout India and exported to other countries as raw
drugs, juices and extracts7. Several other species, such as G. morella (Gaertn.) Desr., G. cowa Roxb. ex Choisy, G.
mangostana L., G. kydia Roxb., G. lanceifolia Roxb. and G. pedunculata Roxb. ex Buch.-Ham, are also traditionally
used and traded for various culinary and medicinal purposes7. The trade analysis of Garcinia species suggests that
the demand for the dried fruit rinds (raw drugs) and its value-added products are increasing4,7.
Garcinia fruits are a rich source of (−)-hydroxycitric acid, anthocyanins and polyisoprenylated benzophenone
derivatives like garcinol, camboginol, guttiferones and xanthochymol10. (−)-Hydroxycitric acid, often
abbreviated HCA in commercial products and advertisements, has gained considerable attention as a promising
anti-obesity agent, and commercial Garcinia extracts claiming a high content of (−)-hydroxycitric acid are popular
food supplements worldwide11. In human and animal studies, (−)-hydroxycitric acid has been reported to
effectively curb appetite, suppress food intake, increase the rates of hepatic glycogen synthesis, reduce fatty acid
synthesis and lipogenesis and decrease body-weight gain12. However, contradictory results have been reported,
suggesting that (−)-hydroxycitric acid can cause only short-term weight loss, the magnitude of the weight loss
effect is small, and the clinical relevance is uncertain13. The safety related to the intake of extracts with a high
content of (−)-hydroxycitric acid is also uncertain14.
A common problem in herbal products highlighted in recent media reports and in scientific literature, is adulteration
in high value raw drugs and finished products15–17. The underlying reasons for such adulterations may be
due to confusion as morphologically similar material identified by vernacular names in different languages enters
the chain of commercialization18, lack of authentic raw plant material19, and also adulteration for financial gain20.
Adulteration may be considerable, given that there is no regulatory tool for quality control, no strict commercial
testing for authentication of herbal products, and a lack of authentication along the value chains for highly traded
medicinal plants21.
Value chain research focuses on the nature of the relationships among the various participants involved in the
chain and on the implications of these relationships for development21. The demand for medicinal herbs or herbal
products is growing at the rate of 15–25% annually21. Surprisingly, only a limited number of studies exist with the
focus on value chains for herbal medicines22. Understanding and establishing the value chains and trade network
for herbal medicines may reflect the reasons for the variation in quality of a particular herbal drug.