Why does rabies still plague India in the 21st century?

In a rapidly changing world, responsive and scientifically sound surveillance systems are needed in order to better understand, and possibly predict outbreaks and spread of zoonotic infectious diseases. Unfortunately in India, most efforts towards strengthening response to zoonoses have mainly focused on improving technical and laboratory capacity. Surveillance and the collection of field data have either been neglected or at best patchily implemented. 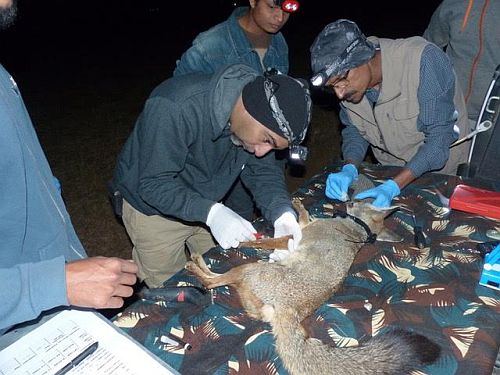 Making a case for rabies control in India The case of rabies in India is a classic example of such neglect. Despite India having more cases of human rabies deaths (20,000) than any other country in the world, we suffer from a massive knowledge deficit. Even today, the primary citation for rabies incidences in India comes from one study carried out in 2003. One of the key reasons for this grim reality is the lack of a comprehensive policy for rabies control that is based on rigorous scientific study of disease dynamics in India.

The present strategy for the control of rabies in India is based largely on the World Health Organisation’s guidelines, which prescribe annually vaccinating 70% of the dog population to reduce the prevalence of rabies in the dog population. Mass vaccination is supposed to be accompanied by vector population reduction in the form of Animal Birth Control (ABC) programs . However, these strategies have rarely been systematically implemented in India, and their efficacy or practicability rarely tested under Indian conditions. 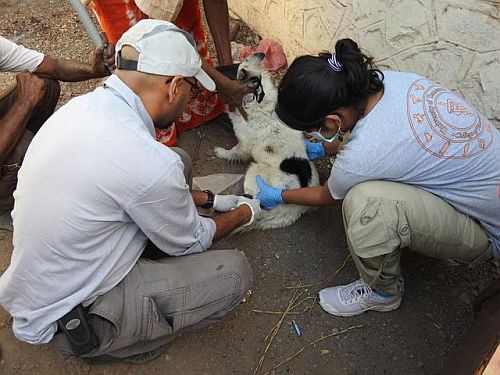 Unlike other countries in Africa and Asia, India has a panmictic freeranging dog population that occurs at high densities. There is also a high turnover rate in the dog population due to high reproduction and low adult survival. A typical street dog is estimated to live no more than 3 years. Furthermore, even though a high proportion of free-roaming dogs are quasi-owned, i.e. they may be associated with a reference person and occasionally fed, they are not restrained or provided with health and fertility control interventions. However, frequent vaccination campaigns are necessary to eradicate canine rabies, since a single rabies vaccine injection does not result in long lasting neutralizing antibodies. If vaccination coverage is not sustained, rabies can rapidly re-establish number.

Not surprisingly, this target 70% vaccination coverage has rarely been achieved by any program in India (with one or two notable exceptions). Despite this, many cities attribute a reduction in the incidence of human rabies cases to the success of dog mass vaccination programs.

It is more likely that better education levels in urban centres, as well as increased accessibility to Post-exposure Prophylaxis (PEP), explain the decrease of symptomatic rabies in humans in some areas. Given that rabies is not a reportable disease, and because symptoms can vary, rabies in dogs can persist in urban India despite claims to the contrary. Circumstances in rural areas are much poorer. There are very few targeted campaigns for education or vaccination in villages and almost no sero-epidemiological evaluation of vaccination efficacy, even though the majority of rabies cases are reported from villages.

A conservative estimate puts the human death toll from rabies in India at ~20,000/annum, the economic cost of PEP following dog bites at ~INR 200 crores/annum with loss of 38 million man-hours for post-exposure treatment. The cost of rabies prevention measures in towns and cities is not known, but is likely to run in the hundreds of crores/annum. Thus, both human as well as economic cost of rabies is not insignificant. Given that rabies is a wholly preventable disease, these statistics provide an example of a failure of the scientific as well as policy environment around rabies control.

In these unique circumstances, it is important to understand the dynamics of rabies in these super-abundant free-ranging dog populations, so that a site-specific rabies control protocol may be devised. It is also important to understand that rabies is unlikely to ever be eradicated in an Indian context, because of attitudes of people to free-ranging dogs, unwarranted beliefs about vaccinating dogs, dependence on traditional health systems as well as possible alternative hosts in wildlife populations.

Despite the recognition that dogs are the primary vectors of rabies in India, there have been few studies to understand the population ecology of dogs and how this may impact rabies spread or its control. India has the highest proportion of un-owned, free-ranging dogs in the world. Because of poor health care of these dogs, population turnover rates are usually very high. Furthermore, free-ranging dogs belong to different categories (e.g. village dogs, farm dogs, herding dogs, feral dogs), with markedly different ecology and behavior. In such circumstances, maintaining herd immunity using a blanket strategy of mass vaccination campaigns impracticable. Our current project funded by the Wellcome Trust/DBT India Alliance aims to use a “One Health” approach by integrating the fields of animal ecology, epidemiology and movement ecology to understanding rabies dynamics in India across the humandomestic dog-wildlife spectrum.

We use a combination of basic and high-tech ecological techniques to determine population size, demography, movement patterns and foraging ecology of free-ranging dogs. This starts with population surveys using a technique called mark-resight, where in a city or rural area is divided into grids, and systematically surveyed for dogs. Each dog is photographed and its location recorded using a GPS and a smartphone app. Each survey is repeated three times to obtain a “capture” history for each dog. This enables the use of sophisticated Capture-recapture models of population estimation to determine population size and density in a given area. We also record the presence of possible food sources, so that a resource explicit map of dog density can be created.

For a subset of study areas, we capture and fit uniquely numbered collars on a cohort of dogs to enable identification during resampling surveys every 3 months. This allows us to determine survival and population turnover rates in dogs across an urban rural gradient.

Assessing vaccination as a means to reduce the burden of rabies

Mass vaccination of dogs is prescribed as the best option of rabies elimination, with the assumption that vaccinating 70% of the dog population confers population-wide immunity against rabies. However, this assumption has not been epidemiologically tested in India. Given the high turnover rates in free-ranging dog populations in the developing world, and the possible presence of non-responders and immunologically challenged individuals, it is likely that this assumption is violated. For example, in a study conducted in Chandigarh (Singh et al. 2011), the authors found that only 16% of owned-dogs had protective antibody titers for rabies, whereas only 1% of free-ranging dogs tested had the necessary antibody titers.

This shows that, not only are continuous and sustained mass vaccination campaigns required, but also surveillance and testing for population level protective antibody titers is required. Furthermore, dog populations are not homogeneous and consist of several categories (e.g. farm dogs, village dogs) with markedly different behavior and ecology. Accessibility of dogs for vaccination will also vary between these categories and regions, and so too the efforts necessary to achieve target vaccination coverage. For example, the logistics of vaccinating a high density dog population in an urban environment, consisting mostly of unrestricted and semi-restricted neighborhood dogs, would differ from that of vaccinating a low density, rural dog population, consisting of unrestricted family and village dogs. Because of these challenges, there is an unknown proportion of dogs that is always without vaccination coverage, and in areas with a high dog population, this is enough to maintain enzootic status. To test for the efficacy of vaccination as means to reduce rabies incidence, we are conducting a systematic longitudinal epidemiological survey across our study sites. We obtain a blood sample for every dog that is captured, and will test them for levels of neutralizing rabies antibodies at both the individual and population levels. In some cases, we also come across dogs that show rabies-like clinical symptoms. We test these dogs using a rapid field antigen kit (lateral flow device), to determine if they are actively shedding the rabies virus. For dogs that have died, we also obtain brain tissue samples for laboratory confirmation of rabies.

Rabies dynamics in a multi-host system

The vast majority of India’s free-ranging dogs live in rural areas, where they interact with wild carnivores. A potential exists for spill-over of rabies from the abundant reservoir host (dogs) to wolves (Canis lupus pallipes), jackals (C. aureus) and foxes (Vulpes spp.) as these species occur in close vicinity of human dominated areas throughout India. Even though it has been established that dogs are main reservoir for rabies in India, the dynamics of rabies transmission within and between these host populations continues to remain enigmatic. This is mainly due to a lack of disease ecology research on wild and domestic host species in India. To better understand the potential for spread of rabies from dogs to wildlife and back, we are using a movement ecology approach to determine interaction rates. We capture and fit with GPS telemetry devices, dogs, jackals and Indian foxes in the same area. These GPS collars provide a high temporal resolution of data, allowing us to determine the movements of each of these species, the overlap in their home-ranges, and the potential for direct or indirect contact.

The final step of this project will be to bring together all these empirical data to parameterise agent-based models to understand the dynamics of rabies in these multi-host systems. We expect that various components of the model will allow us to determine pathways for rabies spillover/spill-back, link populations, and effectiveness of control measures. Ultimately, we may be able to use these model simulations to test possible alternate strategies to control rabies such as identifying areas of high rabies endemicity, and probable pathways of transmission, and target vaccination and population control measures.

Ultimately, controlling this dreaded disease may well depend on changing our behavior and attitudes to the presence of free-ranging dogs. Dogs are companion animals, and their welfare is best served under human care. If we are to eliminate canine rabies in India, humans need to take full responsibility for dogs by strengthening the laws that govern pet ownership, limit the population of free-ranging dogs and ensure that dogs have adequate healthcare. This will result in win-win solutions for humans and for dogs. 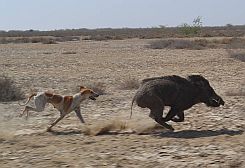