Why is the Arkavathy drying?

While the decline in the inflows to the TG Halli reservoir is attributed to decreasing rainfall or blockages in the river channels, a new study suggests reasons may lie elsewhere

Declining inflows into various irrigation and drinking water reservoirs has been a matter of concern in many parts of India. The Thippagondanahalli (TG Halli) reservoir, meant to supply drinking water to Bengaluru city, is a classic example of this phenomenon. Designed to supply 150 million litres per day (MLD), it is currently supplying less than 15 MLD. The decline was noticed in the early 1990s, but there has been no clarity on what is causing this decline. As a result, the measures undertaken to address the problem and ‘rejuvenate the Arkavathy’ are often misdirected and contradictory. For instance, Cauvery Neeravari Nigam Ltd. (CNNL) believes that the reason is “blockages” in the river channels. Accordingly, CNNL focuses on clearing the obstructions and desilting the channels even as local rural development programmes and many activist groups have been advocating watershed development and building more check dams. Meanwhile, farmers blame changing rainfall patterns for the lack of flows, even as they drill more borewells.

To address this confusion, a team of researchers from the Bengaluru-based Ashoka Trust for Research in Ecology and the Environment (ATREE), along with collaborators from University of California at Berkeley, attempted to systematically explain the causes of the decline. Their article titled ‘Why is the Arkavathy drying? A multiple hypothesis approach in a data scarce region’ was recently published in the scientific journal “Hydrology and Earth System Science”. The study team, led by Dr. Veena Srinivasan, investigated five possible reasons that could explain the decline, viz., 1) changes in rainfall amount, seasonality and intensity, 2) increases in temperature, 3) groundwater extraction, 4) increase in eucalyptus plantations, and 5) blockages in the river channel.

Data from four rain gauges with long-term records were tested for changes in total rainfall, seasonality and rainfall intensity. No statistically significant change in rainfall was observed. The slight increasing trend in minimum temperatures also did not result in any significant change in evapotranspiration. Field surveys showed that many of the ‘blockages’ are actually check dams built by various government departments. While they can cause a decline in surface flows right after a storm, in a “pristine” catchment, the water would have eventually seeped back into the stream as dry season flow. However, because of the decline in the water table, this never happens. The drop in the water table from less than 50 ft in the 1970s to more than 600 ft today is the direct result of intensive groundwater pumping, mostly for agriculture. During the period 1971 to 2011, irrigated cropland more than doubled. Eucalyptus plantations that were once rare now occupy almost 20% of the TG Halli catchment. They have also probably contributed to this decline. Thus, the over-extraction of groundwater through pumping and the large-scale planting of eucalyptus are the two major causes of the drying of the Arkavathy River.

Unfortunately, these linkages are not fully understood by either government departments or common people. In over 70 water literacy meetings conducted by the ATREE team, most farmers believed that rainfall has declined, pointing to the fact that irrigation tanks have not filled in 20 years. This belief is also echoed by many state and central agencies, and is used to justify large-scale inter-basin transfers from west-flowing rivers. By continuing to treat surface water (rivers) and ground water (aquifers) as separate, agencies do not see the link between pumping and the decline in river flows. The ATREE study shows that this link is critically important. If we are to address issues of water scarcity successfully, increasing water literacy and science-based water management is going to be as important as building new dams. 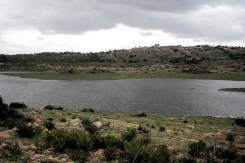