Urban areas in India have been experiencing unprecedented growth in population and income. The implications of this massive urbanization for water resources are only beginning to be understood.

In the context of change, the management of water bodies must seek to continuously reflect both the changes in biophysical processes linking actions to outcomes, and changes in what outcomes stakeholders care about. Using the case of the Thippagondana (TG) Halli reservoir catchment near Bangalore, we illustrate how both the biophysical processes and stakeholder interests have changed over time with increasing urbanization. Different groups have articulated different management approaches over time, but concerns are often raised only after the damage is done, making it difficult to act proactively. ATREE researchers, Veena Srinivasan, Sharachchandra Lele, Bejoy Thomas and Priyanka Jamwal use a coupled human-environment systems approach to argue that it is possible to anticipate both the biophysical and normative changes in the catchment and take appropriative corrective actions. 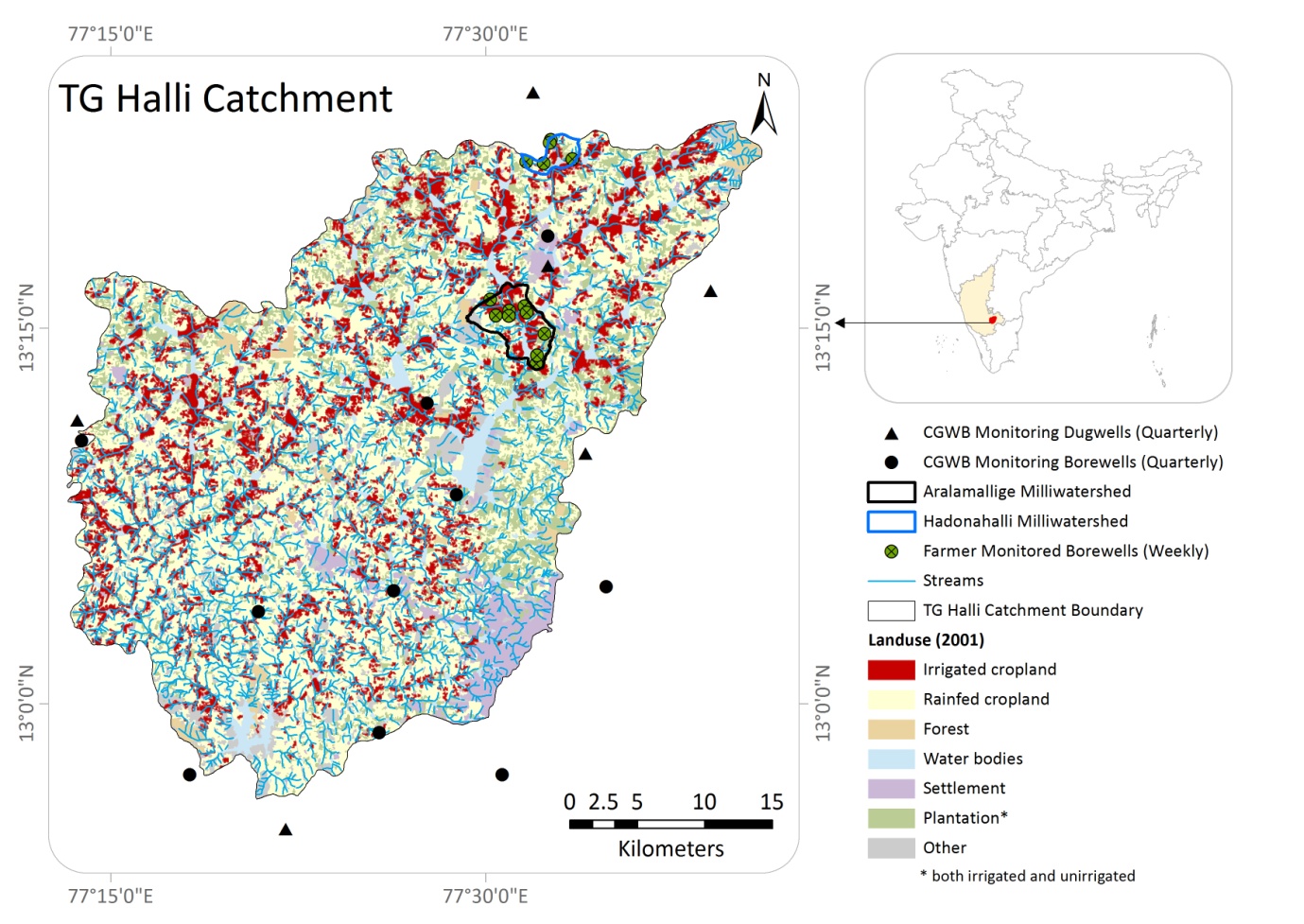 The Arkavathy River catchment, located in Karnataka, overlaps with the western portion of the rapidly growing metropolis of Bengaluru (Bangalore). The region is seasonally monsoonal, receiving 830 mm of precipitation annually. The main stem of the Arkavathy River has its headwaters in the Nandi Hills north of Bengaluru and is joined by its first major tributary, the Kumudavathy River at Thippagondanahalli village, where the TG Halli reservoir (catchment area 1447 sq km.) was constructed in 1935 to supply water to Bengaluru. The catchment contains an older water supply reservoir called Hesarghatta as well as an estimated 617 tanks with a cumulative storage of 143 Million cubic metres (MCM); 1.5 times the storage of TG Halli reservoir. The tanks historically captured a proportion of the surface flows, feeding downstream takes via overflows in a cascade. The catchment is underlain by low-yielding “hard-rock” aquifers. 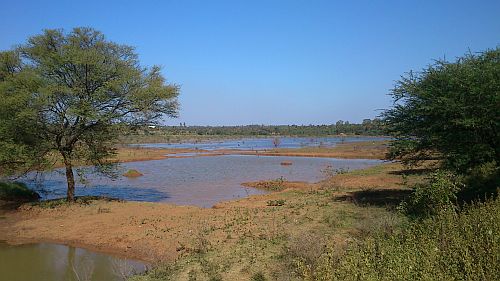 TG Halli catchment has seen rapid changes in recent decades that can be classified into distinct phases.

Farmer stakes shot up after the 1970s as groundwater became accessible through borewell technology. Whereas previously irrigation was only an option for farmers in command areas of irrigation tanks, lower cost fast drilling technologies allowed irrigation to become an option for all farmers. Irrigated area began to increase after 1975 but the share of open well irrigation and surface water irrigation declined sharply in this period. By 1995, borewell irrigation accounted for virtually all irrigated area in the two main taluks falling within TG Halli. At the same time, with the introduction of the World Bank-aided Social Forestry Program in the early 1980s, farmers began to get interested in eucalyptus in a big way. The area under eucalyptus plantations in 1973 was only 11 sq. km., all of it within the boundaries of state Reserve Forests; by 2001, the area under eucalyptus plantations had increased to 104 sq. km and by 2011 to almost 280 sq km.

Starting in the 1970s, inflows to the TG Halli reservoir began to decline. However, analysis of the secondary data suggests that rainfall and temperature could not account for the loss of inflows into TG Halli reservoir. Instead, the primary causes are probably groundwater extraction and eucalyptus plantation expansion. By the early 1990s, the shallow aquifer had mostly dried up and base flows into TG Halli virtually disappeared.

In the early phase of groundwater exploitation, the main management objective was to promote “groundwater development”. The government of Karnataka adopted the policy of low, flat rate electricity tariffs in 1981, which allowed groundwater irrigation to increase. The Bangalore Water Supply and Sewerage Board (BWSSB) increased its withdrawals from the Cauvery River as Bangalore’s population expanded.

Over time, farmers’ interests in the type of agriculture also changed. Traditional food grain crops declined and were replaced by commercial horticultural crops, fruits and vegetables and plantations. Irrigated area continued to expand both in absolute terms and as a fraction of cultivated area. Farmers began to drill many more and deeper wells. Simultaneously, eucalyptus area also continued to expand in response to labour scarcity.

From 1995 to 2005, surface water flows into TG Halli continued to decline. Groundwater levels also continued to drop, measured by the average depth at which water was encountered in new borewells, increased from 100 to 200 m over this period. Starting in the early 1990s, almost no baseflow has been observed in the catchment streams, suggesting that groundwater decline is partially responsible for surface water declines.

Although BWSSB had been concerned about declining flows into TG Halli for many years, by the 1990s, the agency began to raise alarm bells about TG Halli drying up. In 2000, the government commissioned ISRO to study the problem. ISRO’s report recommended the creation of four zones around TG Halli reservoir and the main river channels, and placing of various zonation restrictions. It also proposed restrictions on eucalyptus plantations and groundwater. However, a decade later, most of these regulations remained unimplemented.

At the same time, as groundwater declined and wells began to fail, ground water departments and village panchayats increasingly began to invest in watershed development projects. A large number of check dams were constructed on first order streams, to slow down the stream, and allow the water to percolate. Today, there is an estimated density of 1.4 check dams/ sq. km of watershed area.

In recent decades, stakeholder interests in the catchment have gradually shifted from agricultural to urban. Both the number of wells and the average depths have continued to increase. Rainfed subsistence agriculture is no longer economically viable or attractive. The proximity of Bangalore has created diversified income opportunities. Farmers who lack functioning borewells have diversified their income, increasing their dependence on non-agricultural activities.

While many of these trends are continuations of the trends observed over the last twenty years, the most significant shift observed since 2005 is that for the first time, the region has a slight decline in irrigated agriculture; the decline is both in absolute terms as well as a function of cultivated area. Interestingly, there has been no apparent decline in efforts to extract groundwater. Both the number of wells and the average depths continued to increase; yet irrigated area has declined suggesting that it is not farmers’ intentions but declining borewell yields that is driving this.

Over this period, as the multiple Cauvery stages have been commissioned and inflows into TG Halli have continued to decline, BWSSB has gradually lost interest in TG Halli. TG Halli water today, amounts to a negligibly small fraction (1%) of the water supply to Bangalore. Groundwater levels, measured by the average depth at which water was encountered in new borewells, dropped to 250 m below ground level during this period.
The current situation has provoked a fragmented set of policy responses, which reflect both a range of stakeholder interests as well as different groups’ understanding of the biophysical linkages. As TG Halli’s importance for Bangalore’s water security has declined, the deterioration in the quantity and quality of water coming into TG Halli is largely no longer of relevance to the citizens of Bengaluru! TG Halli is now only valuable because of its reservoir storage capacity, not for the water itself. Reflecting this, recent plans for TG Halli involve using it to store either treated wastewater or water from inter-basin projects such as the Yettinahole project.

Even as BWSSB has lost interest in restoring flows, another agency, the Cauvery Neeravari Nigam Ltd. (CNNL), a state government agency was given responsibility for rejuvenating the Arkavathy River. CNNL conducted its own preliminary study of the river system and concluded that the primary reason for reduced inflow into TG Halli is obstructions to flow within the channel network. CNNL's policy response has been to identify these obstructions and engage bulldozers to remove them and to desilt the channels. However, whether removal of obstructions alone can (or should) contribute to increase of inflows into TG Halli remains in question.

In response to widespread concerns over groundwater depletion, the Karnataka Groundwater Authority was created by an Act in 2011, with the mandate to regulate groundwater in the state but this Groundwater Authority is yet to put in place any effective measures to control groundwater extraction. Finally, the High Court is focusing on enforcing the zoning concept originally proposed in the ISRO report while farmers are still drilling and pumping but also beginning to move out of agriculture and sell their land.

In recent years, a number of citizen's groups and social movements have emerged, driven by a range of underlying motivations including urban elite looking for recreational spaces, spiritual movements, and rural environmentalism. But in practical terms, they are primarily focused on reviving flows in the stream and system tanks by removal of eucalyptus trees and channel encroachments, desilting tank beds and perhaps diverting treated wastewater flows into lakes.

Over the next decade and beyond, land in TG Halli catchment will continue to urbanize. Field visits through the catchment reveal that land has been sold to developers in many parts of the catchment and yellow street signs are visible in many places showing that many places which do not show up as urban land uses in a satellite image are likely to convert in the future.

Obviously, future biophysical changes cannot be observed; but they can be modelled. Our model suggests that as the catchment urbanizes, runoff into TG Halli will increase again both due to increase in paved area and sewage. This suggests that in 20 years, the Arkavathy could become a polluted urban stream like the Vrishabhavathy and TG Halli could begin to look like Byramangala tank downstream of Bangalore, which receives all of Bangalore's wastewater.

It remains uncertain what the future management approach to TG Halli will be. However, it is clear that many of the agencies and stakeholders involved do not understand the biophysical linkages. As a result, much of the policy and popular response is based on trying to invoke nostalgic memories of a flowing river, rather than an understanding of the likely future scenarios.

Based on this analysis of the historical trajectories of the basin, it is clear that in the past management responses have been reactionary, ensuing only after the changes have occurred. We suggest that a better way forward is to help stakeholders anticipate changes before they occur and visualize likely futures and trade-offs between alternative ways forward.