Grassland/ wasteland: the politics of nomenclature

When grasslands are dubbed 'wasteland', they tend to get put to more 'productive' use through the agency of stakeholders in development and urbanization. Witness recent news reports on state-supplied numbers on 'wasteland' acreage available and the potential of it being put to industrial use.Thepoint that gets glossed over is that such miscellaneous use may take place in grassland, scrub and thorn forest biomes that support critically endangered species such as the great Indian bustard, lesser florican and other endangered and endemic species such as Indian wolf, Indian fox and blackbuck. Also, that these grasslands have supported the livelihoods of local and nomadic pastoralists for centuries.

Determining that the first step is to demarcate areas that need to remain undisturbed, ATREE is hosting a two-year project to produce country-wide maps of dry grassland biomes using available satellite imagery, with finer-scale maps at district level for Andhra Pradesh, Karnataka, Madhya Pradesh and Maharashtra. This will be a crucial first step to charting out areas that require urgent conservation actionand developing landscape management plans for the protection and sustainable use of grassland habitats with local communities. Read more on the Indian savanna project here.

This project has been undertaken by the Ecosystems and Global Change programme of the SuriSehgal Centre for Biodiversity and Conservation . 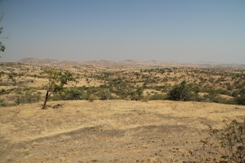