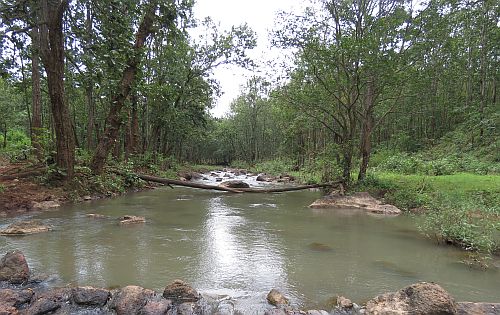 The numerous brooks, streams, and rivers of the forests of the Maikal Hills in Madhya Pradesh are the origin of the river Narmada. They are also home to two major forest-dwelling communities, the Baiga and the Gond. The Budhner River in this picture is an important early tributary of the Narmada. For the people of the Maikal Hills, Budhner is Boodhimāi, the mother of the Narmada. 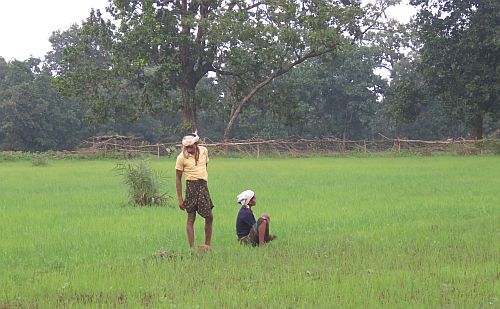 Nestled in the Maikal Hills is a region called the Baiga Chak comprising 52 villages that lie inside the sal-dominated moist deciduous forests. The forests of the Maikal Hills straddle the border of Madhya Pradesh and Chhattisgarh. The Baiga and Gond people, who predominate the Baiga Chak, are recognised as Scheduled Tribes under the Indian Constitution, and call themselves Adivasis, or the first inhabitants.

The villages of the Baiga Chak form an agro-forestry mosaic. Here, the Gond couple whom I called bhai and bhābhi, and with whom I stayed as a paying guest for more than a year, take a break from weeding in their millet field at the edge of the forest. The makeshift fence in the background is meant to keep away forest animals, especially wild pigs, chital, and sambhar, that feast on the crops.

Till as recently as a hundred years ago, the Baiga, the original inhabitants of this region, carried out shifting cultivation on the forested slopes of the Maikal Hills, combining this with hunting and foraging in the forests. Disapproving of their nomadic, forest-dwelling existence, the British brought in Gond peasant farmers into the uplands from the foothills. Over time, the Baiga were compelled to settle down as peasant farmers themselves. Today, both Baiga and Gond are farmers, and grow food for their own consumption. 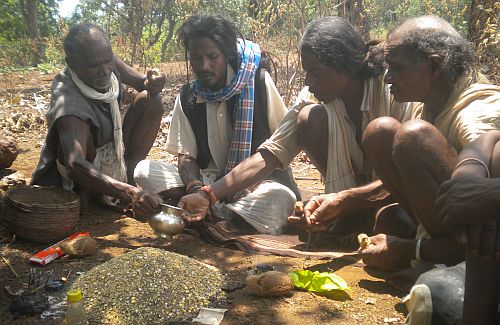 But the forest is inextricably woven into the social fabric of the mixed community of Baiga and Gond that peoples the Baiga Chak in the present day. One of the most significant ritual ceremonies in the life of the forest-dwelling peasantry is the Bidri, which involves the consecration of the seed at the end of the hot summer, and can only be performed by a priest who is Baiga. The priest invokes Thakurdeo, the powerful deity who guards the village and is vested in a tree on the fringe of forest and settlement. Prayer is offered for good rain, a bountiful harvest, and a season free of pestilence for people and crops alike. There are two Baiga priests in the picture above, Itwaari Singh (second from left) and his uncle (extreme right). Itwaari Singh (pseudonym) was seized by the spirit of Thakurdeo as the ceremony proceeded. Itwaari Singh asked Thakurdeo if He was happy with the offering of grain, mahua, chickens, and pig that had been made to Him. As if in divine acknowledgement, the first shower of the monsoon followed that very afternoon. 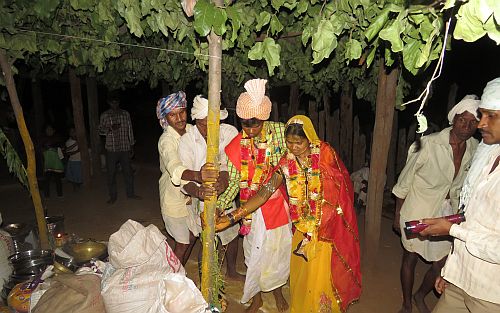 Another important way in which the forest finds expression in the culture of the Maikal Hills is in the form of the maduaceremony in every Baiga and Gond wedding. The madua is a long pole, usually of the sal tree (Shorea robusta), freshly harvested from the forest, and dug into the ground in the āngan or courtyard of the bride’s house. A covered enclosure is built around the madua, and leafy sal branches make up the ceiling. A piece of white thread is tied to the madua after the officiating priests have chanted their spells, investing the thread with the power to ward off undesirable supernatural spirits, and to guard the wedding couple and the guests. Here, a Baiga couple is led to the madua as part of the wedding rites. At the foot of the madua lies a small block of wood called the mungrohi, which performs the central role that agni or fire does in a Hindu wedding: of sacrament and divine witness in sealing the matrimonial relationship between bride and bridegroom, who circumambulate the mungrohi in the manner of the phera of a Hindu wedding. The mungrohi is fashioned out of a branch of the char tree (Buchanania lanzan) from the forest after an elaborate ceremony. 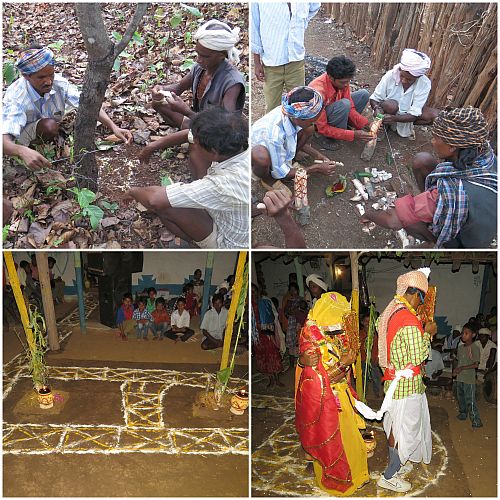 The pictures above show Baiga elders propitiating the char tree (top left) whose branch was chopped to sculpt the mungrohi (top right). The mungrohi is then dug into the ground at the foot of the madua (bottom right), and the bride and bridegroom go around it to the beats of the drum in the background (bottom left). Much like urban Indian society, some traditions stay the same even as changing fashion trends are incorporated into celebrations. Note the sneakers worn by the groom, and the combination of yellow and red worn by the bride, even as the drummers play the nagādāor the drum sitting close to the porch. 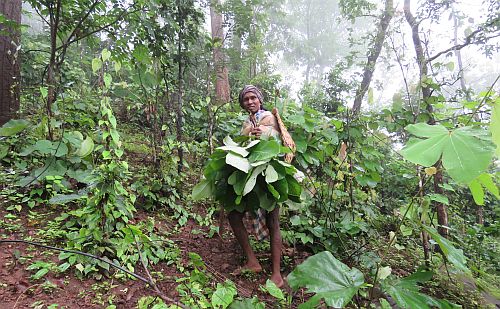 On the morning of the Hariyāli festival, celebrated on the new moon day of the month of Shravan (mid-August), men and boys go into the forest to pluck leaf-stalks of five different plants, including what are locally known as bhanwarmaal, bhalwa,and hasiyādepu, apart from bamboo, to plant them in their fields accompanied by a prayer to Dharti Mātā and Anndāi (Mother Earth and Mother Grain), combining thanksgiving with a celebration of their fertility. Hariyāli is an important element of the seasonal agro-forest calendar for it indicates that the farmer should complete sowing very soon if they haven’t already. In this picture, Aghnu Singh (pseudonym) displays the Hariyāli dārā, which he is putting together with the five freshly plucked leaf stalks in the forest, before making his way to his fields. 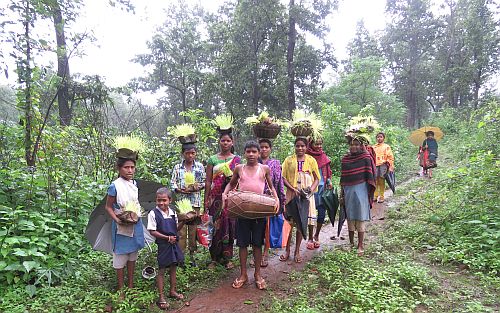 Before long, it is the month of Bhādon or Bhādrapad, and time for a children’s celebration around the time of Rakshābandhan. Wheat grains are sown in a bamboo basket, watered for ten days, and then immersed in ponds in the forest. As the baskets, called khujlu, are carried from the house to the pond, there is much singing and frolic. The lines of the trademark song sung on the occasion go something like this: O, the khujlu are running away after trapping us in their love. 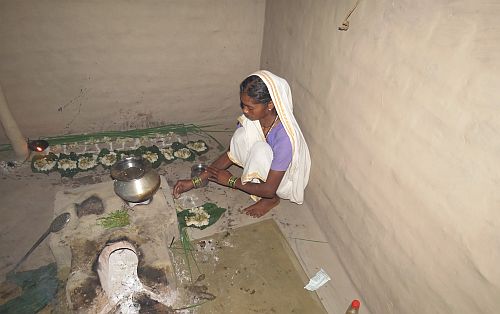 As the crops are about to ripen and the monsoon is wearing itself out, comes the festival of Nawā khawāi, an elaborate thanksgiving and prayer to the clan gods. Since each household, whether Baiga or Gond, belongs to a distinct clan, the gods vary from family to family. However, some of the gods common to both Baiga and Gond are Rātmāi, who is worshipped at the chulhā or hearth, and Dulhādeo-Dulhideo, who are worshipped behind the hearth. Here, Ghasninbai (pseudonym), a Gond woman worships Rātmai after her husband has made an offering of cooked rice and urad dal on separate leaves of the sājā tree. The forest and the field come together once again: the sājā leaves are freshly plucked from the forest and the paddy stalks from the field. The two are integral to the worship. 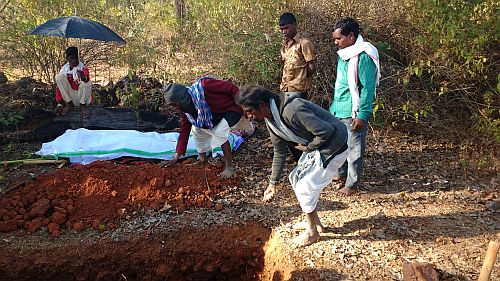 The forest is also where the dead are buried. Although both burial and cremation are acceptable there are social norms that govern the choice. Elderly men and women who have died of illness are usually buried. If they have died an ‘unnatural’ death, such as by falling from a tree or cliff, or due to mauling by a tiger, they are usually cremated. The place where the dead are buried is called a marghāt and lies inside the forest. Here, Sātobai, an elderly Baiga woman, who reminded me of my own grandmother, awaits burial in a freshly dug grave, even as her grandson holds an umbrella over the corpse as part of the ritual. Her husband and nephew make an offering of a fistful of mud in a ceremony called mitti denā. 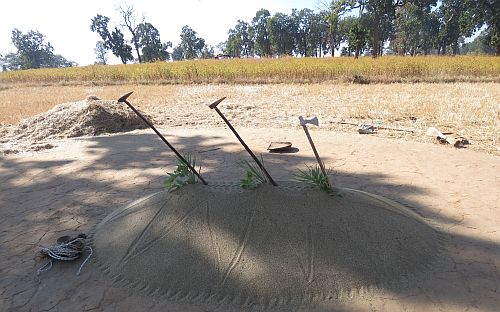 A heap of freshly harvested, threshed and winnowed kutki millet grain awaits propitiation by the farmer before it can be carried home. The grain cannot be propitiated without stalks of dhanbāhirCassia fistula tree) and chhindi, a grass, freshly plucked from the forest. The grain heap is gently impaled with these stalks along with two threshing poles, and an axe. The plateau on which the field lies was once forest with a profusion of chhindi grass. The grass is now gone but the location of the fields is identified by its vegetation history, and called Chhindiyāni Dādar.

The Baiga and Gond communities of the Maikal Hills are in transition as they engage with large-scale forces spurring social, economic, and ecological change. This is visible in the way they live, the food they eat, the clothes they wear, and even the way they socialise. At the same time, these changes are woven into existing traditions as, brick by brick, they weave new trends and new pressures into their existing practices, customs, and traditions. 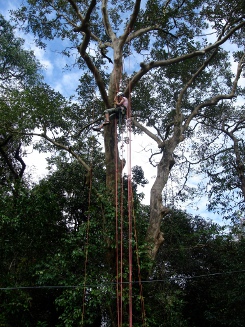