The “Unruly” World: Unearthing the “Madness” in Nature
By Chandrima Home

Rules govern our lives as well as all of society. We humans love to anthropomorphize the natural world. We try to identify characters, behaviors in the natural world that are more human-like and anything happening out of the box is often considered “mad”. I personally like collecting such local trivia about species which are colloquially labeled as “mad”. What intrigues me are the reasons for which they are considered so, and if you ponder over it, it does sometimes shed light on the species ecology. Read more

It was August, 1996; I was six years old then and used to live with my grandmother in a village called Ghataha in Darbhanga district, Bihar. It was a sunny afternoon with wind gushing from all directions when I reached Anhari Pokhair (The Pond of the Blind lady).I had come prepared with my fishing rod made of bamboo stick and bait of apple snail and earthworm in a leaf pouch of water hyacinth. The pond was covered with Makhana (Euryale ferox) plants with other aquatic plants in between such as water hyacinth and algal blooms. Read more

Arriving At My Field Sites
By Rahul Muralidharan

It has been two months since I began fieldwork this summer. After travelling around in the hope of finding two villages to study, I now feel that I have finally arrived. On the one hand, it is stressful as it took longer than expected to find these villages and settle down,but on the other hand it is exciting, given the learning opportunities that lie ahead. In this first ‘fresh-from-the-field’ blog post, I share some of my initial experiences of arriving at my field sites. I also discuss why I chose these two villages in order to answer the central concerns of my PhD study. Read more

I was fortunate to receive a Future Conservationist Award in 2014 from the Conservation Leadership Programme(CLP) for my PhD research on the impacts of land cover change on mammal diversity and distribution patterns in the Papikonda National Park, located in the northern Eastern Ghats in Andhra Pradesh. The CLP is a partnership of three organizations, BirdLife International, Fauna and Flora International and the Wildlife Conservation Society, which works to advance biodiversity conservation globally by building the leadership capabilities of early-career researchers and conservation practitioners from developing countries. Read more

Serenity in Garhwal
By Pragya Jain and Anjan Katna

There was a considerable drop in temperature from Delhi as we deboarded at Kathgodam station early in the morning. Our mini-bus was waiting to take us to Wan where we were supposed to start our trek the next day. After a full night on the train and almost a full day in a tempo van, we reached our guest houses at Wan in the evening.The views changed significantly for the better compared to Delhi. We had travelled through the winding mountain roads and waited 8 hours for our destination to arrive. As we moved to higher altitudes, the density of civilization reduced, the view became clearer and the air sweeter. Read more 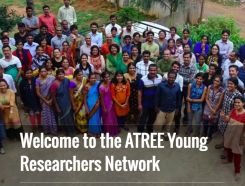