In 2010, ATREE started the TN Khoshoo Ecology and Environment Award for Schools.The new award called for action on environmental issues, and was announced in Delhi and Bengaluru. The idea was to reward initiative/ action on local environmental issues and so seed environmental consciousness. The award was designed in partnership with The Teacher Foundation, Wipro, IAIM-FRLHT and Pravah, and recognised schools for catalyzing and enabling environmental thought and action among its students. 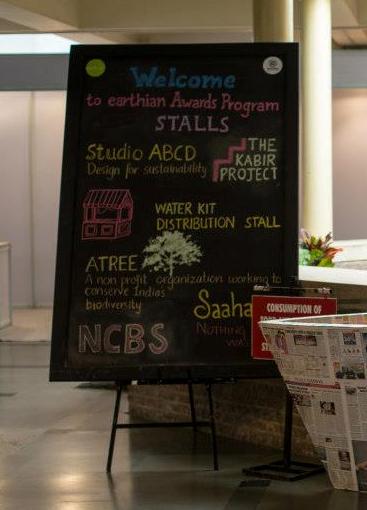 In 2011, the TN Khoshoo Ecology and Environment Award for Schools became part of the Wipro earthian awards, and is now called the TN Khoshoo-earthian Trophy. This strategic partnership with Wipro is the result of a shared vision of the role of youth in potentially advancing conservation thought and action in routine decision making. The TN Khoshoo-earthian Trophy recognizes one school and one college from among the short-listed earthian winning submissions, for higher degree of feasibility, practical implement-ability and contextual understanding.

ATREE is also one of Wipro’s knowledge partners in the fields of environment, development and conservation, for the earthian’s Continuous Engagement Programme (CEP). The CEP is the second part of the 'earthian Sustainability Program for Schools and Colleges'. It will be a process of continuously engaging with the winning institutions on multiple fronts to develop capacities for activities around sustainability. The purpose of this investment in developing next generation capabilities by earthian and its partners is to help develop an interdisciplinary view of the problems of environment and development, and encourage rigour and critical thinking for action.

Students of the Government Secondary School, Bongten, West Sikkim, won the award for a project titled 'Environment as a shared space'. The students spent a year surveying 45 flora species, and the various interactions they have with other organisms, in and around their school campus. They also conducted a socio-economic survey recording the community's awareness on ecosystem services. They ended their report with a case study on paddy cultivation - a major source of income for the community, focusing on the different strains of rice, cultivation techniques and fertilizers used by the community. The team's suggestion included a switch to organic farming practices and adopting farming techniques that would boost native rice strains.

Winners in the college category, the Xavier University, Bhubaneswar, Odisha, developed an analytical report on solid waste management in their city. They identified the main sources of solid waste, e-waste, plastic waste and bio-medical waste and the key challenges associated with them. The team devised a model that would assist the municipal council in segregation, collection and treatment. This report has been presented to the State Municipal Council in an effort to work alongside each other.

In addition to this, the team also audited the University's energy and water consumption and submitted a list of recommendations to students and the governing board - with a special emphasis on behavioral changes as a collective.

The winners were awarded a plaque and ATREE's coffee table books -The Himalayas and Sahyadris at the event.

The TN Khoshoo Earthian Trophy has been a part of the Wipro Earthian Awards since 2011. This partnership with Wipro is the result of a shared vision of the role of youth in potentially advancing conservation thought and action in routine decision making. Each year the TN Khoshoo-earthian Trophy recognizes one school and one college from among the short-listed earthian winning submissions, for higher degree of feasibility, practicality and contextual understanding.

The TN Khoshoo Earthian Trophy also commemorates the legacy of one of India's leading environmental scientists, Dr Triloki Nath Khoshoo (27 April 1927-10 June 2002). Dr Khoshoo was also the founder trustee of ATREE and an able administrator, who started his career as co-founder of the Department of Botany at the Punjab University, Lahore, which moved to Khalsa College, Amritsar, soon after the partition of India. Dr Khoshoo became the first Secretary of the newly created Department of Environment of the Government of India in 1982.

He joined the Tata Energy Research Institute as a Distinguished Fellow In 1985 and contributed to public policy discussions at national as well as international forums. He was awarded the Padma Bhushan in 1992 and the Sasakawa Environment Prize by the United Nations Environment Programme in 1996.

Dr. Khoshoo was a prolific writer. Over the course of five decades, he authored more than 250 research papers on plant genetics and evolution, biomass, energy, forestry, conservation, etc, and wrote wrote seven books and edited eleven more on a wide range of subjects. His book 'Mahatma Gandhi: An Apostle of Applied Human Ecology', published in 1996, was widely applauded for his interpretation of the practical relevance of Gandhian views.

Winners through the years

The project required hands-on skills in educating residents on issues of waste management; persuading and motivating skills to convert them to this practice; partnering capabilities to create a chain of movement of waste from a house to recycled or useful products like compost, and thereon to its buyers.

Why Rajalakshmi Engineering College, Chennai got the TN Khoshoo-earthian award: This project is an example of household level outreach with ripple effects in community and surroundings. It is a good example of local autonomous action and community participation. The college carried out a practical activity to its logical end, with little or no loose ends.

Why KK English High School, Bengaluruget the TN Khoshoo-earthian award: The school demonstrated commitment to action that was demonstrated in scale, thoroughness of action and length of project in time. The project included all students and staff, not just students participating in the competition. The project was carried out for the entire year and is evidently part of school practice before this as well.

Why Sakar English School, Ahmedabad get the TN Khoshoo-earthian award: For being able to break up the problem of city into workable components, thereby providing a practical handle that could lead to immediately do-able/ practicable measures.

TN Khoshoo-earthian trophy 2011
Winner in the college category: Indian Institute of Management, Kozhikode
Project: Integrating solid waste management and organic farming, within the theme: cities and communities, agriculture, role of policies, regulations.
The IIM paper addressed the issue of inorganic farming and associated deterioration of soil quality, as well as perceptions that discourage farmers from using organic methods. A parallel investigation into the problems besetting solid waste management in Kerala lead the team to create a Mobius of one issue being part of the solution for the other issue. The IIMK team propose a hub and spoke system of waste collection, its treatment and disposal as organic manure and pesticide.
The IIMK team members wereSivaharsh S, Raj B, Praveen S, Paresh Mali, MonicaPachori.
Read the full project submission.

2010-2011, the first year of the TN Khoshoo Ecology and Environment Award for Schools. The award was launched in Delhi and Bengaluru in early 2010. Coordinating organisations–Pravah, in Delhi, and ATREE, in Bengaluru, started their interactions with schools in July 2010, briefing schools on the long-term objectives of the school awards, and guiding them through the processes for participation.The efforts of the students, schools and the organisers were showcased in interactive Environment Melas in Delhi and Bengaluru on 24th January and 28th February 2011 respectively. The winners of TN Khoshoo Ecology and Environment Awards for Schools 2011 were announced here.

The criteria for winning were impact, sustainability of the idea, replicability, and creativity.
For more on the first awards.